Ever since completing the build of my Audio Note Kits Kit 1 SET amp around this time last year, I’ve been wanting to upgrade all of the stock tubes that came with the kit. Brian Smith of ANK had explained that the reason for shipping the kit with entry level valves is simple: you didn’t want someone who had messed up something in their build blowing up a pair of fancy 300 B’s (worth their weight in plutonium) the first time they try to power on their amp. So, the stock Russian and Chinese tubes that come with the kit are for testing and burn in. It’s not that they sound terrible – in fact, the stock tubes sound quite good. There’s just better stuff out there that will take the sonics of the mighty Kit 1 to higher levels.

Tube Rolling, Round I:

On the advice of another Kit 1 owner on Audiogon, my first move was to upgrade the stock, Russian 6SN7 tube on the driver board to an RCA “gray glass” tube from the 1940’s, so called because the largely opaque glass is coated with a silvery material on the inside. This single tube swap kicked the Kit 1 up several big notches. Most noticeably, the soundstage width and depth expanded all over the place; it was not subtle! And the cost: only around $60 US.

Saving my dimes and nickels for a few months, it was time to do some more upgrading of that glass. I called Andy over at Vintage Tube Services for some advice on what to do with the stock 5687 signal tubes on that driver board.

“I’ve got no idea,” I replied, somewhat embarrassed.

“Well, describe them to me.”

“Hang on,” Andy said, presumably riffling through his copy of The Tube Bible.

“Ah,” he replied after a pause, “Those are G.E.’s, and those dots are the manufacturing date code. Bottom of the barrel stuff – you can do much better.”

We finally settled on a pair of perfectly matched RCA “Rusty-Plates.” I had hoped that the new 5687’s would smooth out some upper midrange glare that I was hearing on some of my music and while the difference wasn’t dramatic, the RCA’s definitely showed greater finesse in that department.

I should add that one fun thing that Andy does is to include the original packaging when he has it: 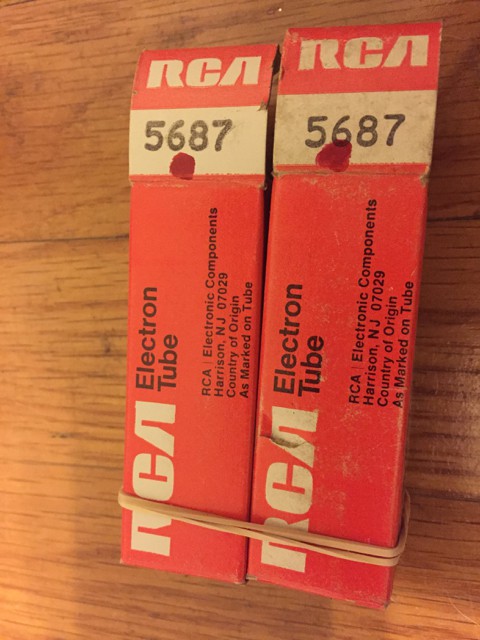 The next tube to be upgraded was the Kit 1’s rectifier. The kit ships with a Russian, Electro-Harmonix 5U4G, but because those tubes were back-ordered at ANK when my kit shipped, Brian substituted a Chinese Psvane 274 B, a drop in, variant rectifier tube. Brian said that this tube was a nice little upgrade over the stock 5U4G, and I can verify that this is true. When I later had the chance to test a stock EH 5U4G in my Kit 1, the 274 B proved to be, at the very least, a much quieter tube.

Andy, however, is not a fan of most new production Chinese tubes as far as I can tell, and he suggested I try an NOS (new, old stock) RCA 5U4G from the 1940’s. I was eager to do this because I’ve heard from other SET owners that the choice of rectifier tube can have greater sonic impact than even the choice of power output tubes (300 B in this case).

The impact of the new rectifier was immediately apparent in a firmer, more powerful bottom end – a very nice touch, indeed!

The remaining candidates for upgrading were the 300B output tubes themselves. I hadn’t planned on touching those tubes for another six months or so because I’m on a budget and 300B’s are SO FREAKING EXPENSIVE.

But a happy convergence of stumbling on a recent Internet survey of “working man’s 300B’s,” along with Black Friday / Cyber Monday sale prices, resulted in a shiny new pair of 300B’s. More on that next time.

Take care, be kind and enjoy your music.