I’ve had a busy work week and not that much time to work on the Kit, but last night I managed to finish up soldering all the wires that attach to the input selector switch, which is the next (and last) major item to be installed!

A Digression About The Manual

Okay: I feel I ought to say at this point that you can quite probably build this kit much more quickly than I have. I am a very slow, careful builder and somewhat of a perfectionist (which I suppose goes with being an audiophile). I’m also keen on avoiding mistakes that will be time consuming and aggravating to track down later. And I have a family and a demanding day job, resulting in a dearth of leisure time to work on this project.

And, hey, come to think of it, writing this blog takes time away from building the kit, too!  😉

However, I know you’ll have at least one concrete advantage when/if you take the plunge and build a Kit 1: you’ll have a complete, up-to-date version of the assembly manual! It’s due to be completed by the end of January, 2015 (this month). In the mean time, I’ve been working from a “beta,” work-in-progress version of the assembly manual, along with the previous, 2010 version posted on the ANK website. The result has been a lot of email correspondence and phone time with the supremely patient and always-enthusiastic Brian Smith of ANK, who, fortunately, seems to enjoy talking to his customers.  🙂

If you look at the product page for the Kit 1, it says that the basic design of the amp hasn’t changed significantly since its introduction 20 years ago. This is essentially correct: beyond a heavier chassis and physical changes to the Filament PCB and its heat sinks, the circuit design of this classic amp is the same. And yet, there have been changes that become relevant when you are building the amp: different colors on some of the Mains Transformer wires, different coloring and sizing of some resistor bodies and so on, with the result that what you’re holding in your hand may not always look just like what the photos and text in the older PDF manual are describing. Additionally, the wiring and installation of the input selector switch (which we’ll be exploring today) doesn’t appear in at all in the previous version of the manual because, as Brian explained, most people didn’t opt for the multiple input option several years ago, but now most people do.

I offered to help proof and edit the 2014 version of the Kit 1 Assembly Manual, since I’ve learned so much from this project and still have a “newbie’s” perspective fresh in my mind. Brian took me up on the offer, and we may very well post the revised manual to this blog when it’s finished.

Back To The Build…

My purpose in this blog post is to offer help to future builders of the AN Kit 1 who may, like me, find themselves feeling intimidated looking at the Elma input switch with all its tiny contact leads. So here’s your orientation to this component!

You’ll notice two flat-head screws on the back of the switch, below, one at the top and one at the bottom. Draw an imaginary line that intersects the two of them and cuts the circle in half. The contacts on the left half of the circle will connect to the RIGHT input RCA’s. The contacts in the right half of the circle will hook up to the LEFT input RCA’s. You can tell that you’re holding the switch in the correct position to do your input wiring by making certain that the gap in the white washer on the back of the switch points to the left.

Now, take a careful look at this next photo. First, you’ll see that I’ve attached the gold knob to the shaft of the switch. You’ll also notice that the side of the switch is made from transparent plastic and that through it you can see a gold stripe. As you rotate the switch, this gold stripe (and its counterpart, located 180 degrees away, on the exact opposite side of the circular switch) will move. At each click position on the switch, these two internal gold contacts will always point to the input connector tabs on the back of the switch that are in use at that rotation position. (In this photo – counting the input tabs counterclockwise from the left of the top, flat-head screw – the switch is currently set at input #2.) In any event, observing where those internal gold stripes point will help you to confirm which leads are active as you test your connections. Cool!

The two output tabs, which are closer to the center of the switch, may be easier to see in this next photo:

Here’s one other little feature of the switch that’s good to notice and easy to miss. Here’s the front of the switch without the knob and with the locking nut removed from the threaded switch shaft. On the left, right next to the threaded part of the shaft, you’ll see a little, raised notch. This “key” has a corresponding notch cut into the chassis to make certain that the switch is oriented properly.

And finally, here’s a photo of all the wires, including inputs 1 through 3, right channel (violet) and left channel (white) and the two output channels, left and right, closer to the center of the switch. 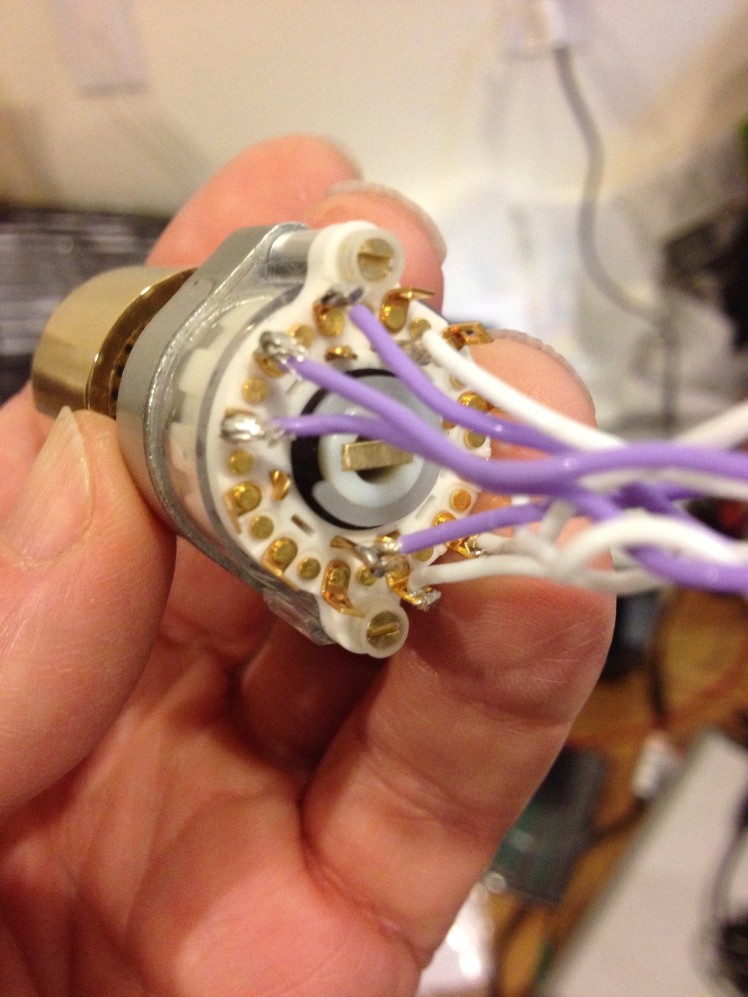 So there you have it!

We’re getting really close to the end of the assembly process! In our next post, we’ll look at how the input selector connects to the RCA’s and the Driver Board.