Having fully populated all the PCB’s – with the exception of the four big Mundorf film caps that will go on the Driver PCB – we are ready to begin the extensive process of inter-wiring; that is, we are soldering wires in place that will connect the PCB’s to each other and to other elements of the amp, such as the transformers, valve bases and 300 B hard wired section. This takes a lot of work! Rather than going for days without another post, I thought I’d share a few pics of this phase as a work in progress.

In this photo, you can see the first stage of interwiring: note the twisted red and black wires running between the Power Supply PCB (lower right) and the Driver PCB (bottom center). It’s difficult to get a sense of this work from such a photo because most of these connections end up running underneath the PCB’s when viewed from the bottom of the amp.

Here’s a closer view of the wiring between the PS and Driver boards after a few more connections have been completed:

You’ll also be making connections between the mains transformer secondary wires and various components. Note the brown wires running horizontally across the photo below. We’ve twisted those two mains transformer wires together and soldered them to two particular pins under the center valve base of the Driver Board.

And the beat goes on. Here you can see even more of those mains transformer connections: twisted pairs of brown, grey and red wires, as well as some single, striped wires connecting to the PS board.

And yet more interwiring! Notice the red wires running from the top of the photo to the pins of the 300 B valve bases. These are coming from the mighty output transformers. 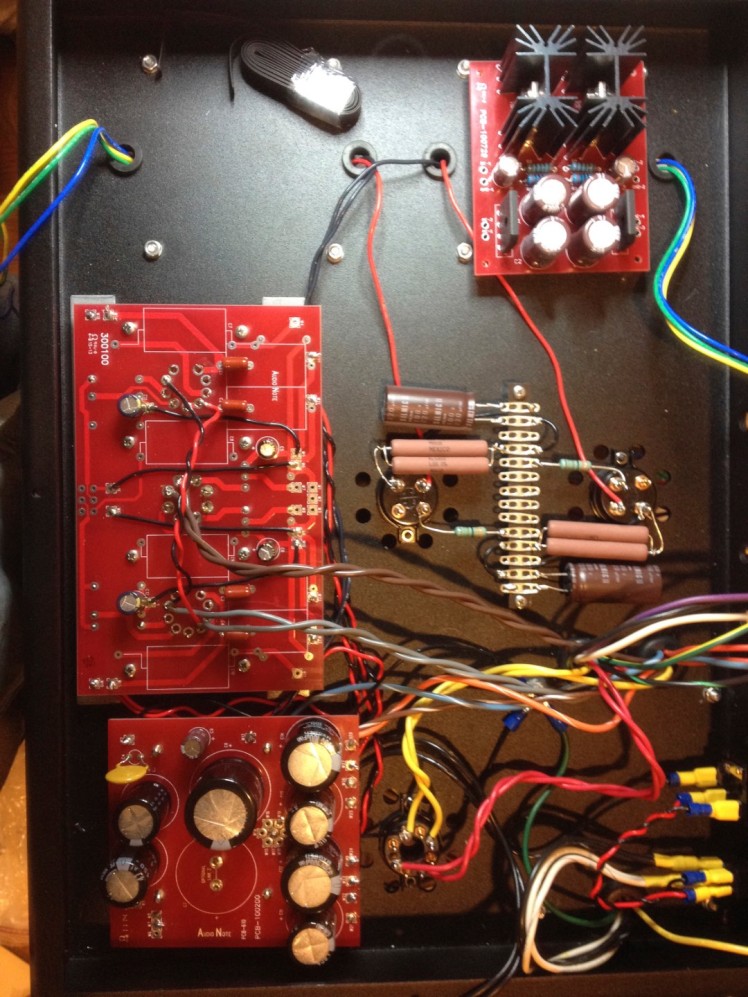 You may well ask: How the heck do you keep all these connections straight?

The answer: You are working from interwiring diagrams in the PDF kit manual.

Much, much more of this to come in our next installment!

A few posts ago, I neglected to include this photo of the installed top valve insert plate. This is the brushed stainless steel version. The copper version shown on the Audio Note Kit web site looks especially sharp, but was apparently on back order when my kit shipped. Brian said he’d send along a copper plate when they’re available again. In the mean time, here’s how it looks: 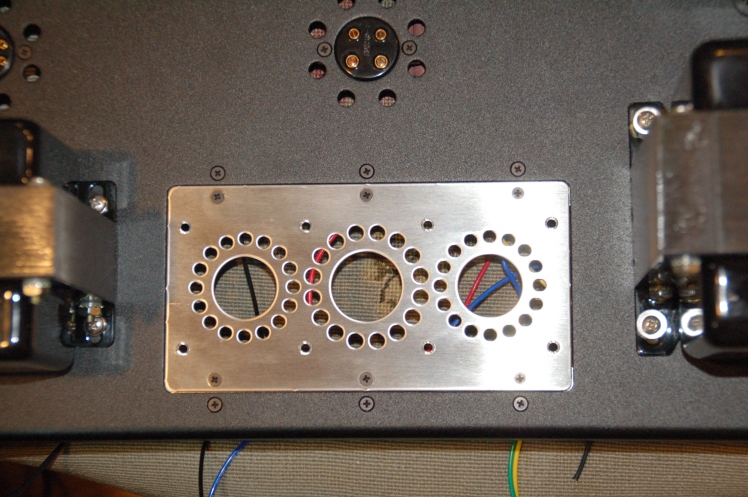